Day 1: Adventures in Moving a (my) College Student!
Last week was the end of final exams for our daughter at the University of Arizona. She was moving out of her rental house, because she is moving to New York City to do an internship with Vogue Magazine for the Spring semester. The plan was for me to fly out to Tucson on Tuesday afternoon, pack her car starting that evening, deposit her furniture with a few friends (all in different locations) for safe keeping, and leave late Wednesday morning.
What started out as a calm, and well planned (or, so I thought!) adventure, turned into three twelve-hour long days! 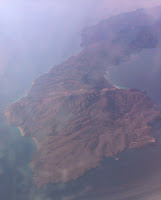 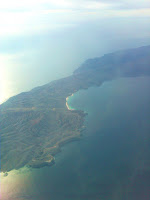 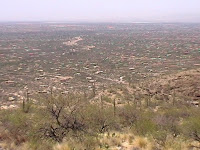 The view of Santa Barbara from the air is really beautiful, but a few hours later as I watched our approach to the dusty landscape surrounding Arizona’s “Sky Harbor Airport”, I found myself grateful for where we live (nothing against Tucson but I couldn’t help but be thankful that we live in Santa Barbara).

Upon landing, I had received a text message from my daughter that said, “I’m picking you up Dadio…I’ll be the one in the green “Shrek” car, with a bag over my head!”

I didn’t quite understand her message, but she’s often full of surprises.
I didn’t recognize her car because she was in a rental car, the “Cube”. I never did figure out who makes the thing, but it was an interesting piece of automobile design. It’s the car with the curved back window that wraps around the side of the vehicle on the passenger side. 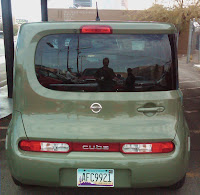 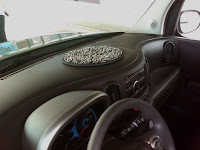 The paint was in fact “Shrek” like green (think the movie), and the dashboard was replete with a round disc of shag carpeting, I guess a sort of sub-woofer for the stereo? The headliner’s center light was encircled with dimensional rings molded into the headliner material, similar to the rings created when a pebble is thrown into a pond. The windows were huge, and I could see why a college student who may be concerned with “how things look” would want to put a bag over her head when driving this thing. Oh well, it was wheels, and that was fine with me.
Next stop, check in and drop my bags the Arizona Inn, our residence of choice when visiting Tucson and the University of Arizona, where she’s a Senior. 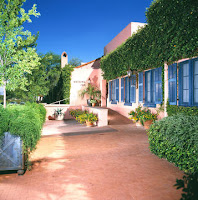 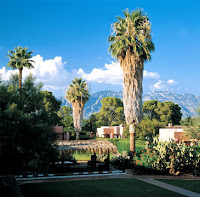 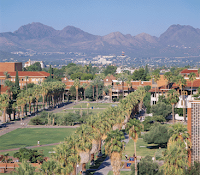 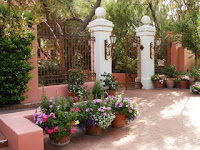 We love the old school style of this hotel, and always request room 127 (pictured), a must when staying there.
It has a fireplace, and a private sun terrace on one side, and a private covered terrace, large enough to entertain on, on the other side, should the mood strike you.
A little about the Inn’s History (from their website):
The Arizona Inn was built in 1930, in what was then the desert by the rich and compassionate Mrs. Isabella Greenway, Arizona’s first Congresswoman, and friend of Eleanor Roosevelt. Reportedly moved by the number of disabled World War I veterans in Arizona, and in the philanthropic spirit of the New Deal, she had started a company called the Arizona Hut to give them employment making furniture. But, with the Wall Street crash, she ran out of orders, and found herself with enough furniture to fill a hotel, so she proceeded to build the first part of the Arizona Inn, in only three months. It was described as “a simple home-like cottage hotel,” where the very rich would move in for months at a time, along with their servants, their lap dogs, and their little habits.
Today, the Inn is unique in its on site cabinet-making shop with its own master craftsman who creates custom furniture pieces for the Inn and restores and copies some of the original Hut furniture so that the spirit, style, and idea of the Inn is kept alive. The furniture is still used today in the guest rooms, dining rooms and public spaces.

Next, we drove through the sizable U 0f A campus which has approximately 40,ooo students, and is home to the famed U 0f A Wildcat Basketball Program, led by legendary coach Lute Wilson for the last 26years, until his retirement just last year. Coach Wilson led the PAC-10 Arizona Wildcats to the NCAA playoffs for 24 straight years! 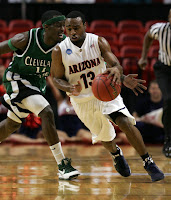 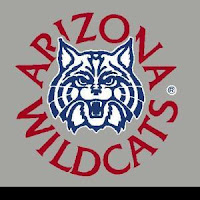 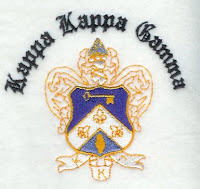 Finally, we pulled up to the nine bedroom house our daughter shared with eight other of her Kappa Sorority sisters.
To say the living situation with a total of nine girls was a zoo for our daughter would be an understatement!
Seems this house is well known at the school and is fondly referred to in the local Greek world as the “Niner“, in reference to its nine bedrooms (or so I hoped).
I had given our daughter clear instructions to be prepared for moving day, and to get boxes, packing tape, all of her personal belongings gathered up from around the house, etc… so we could get in and out of there quickly.
None of that had happened.
After dinking around for a few minutes and surveying all that was to be done, we thought it best to make a Target run and get the supplies we needed, and vowed to start early the next morning. We had done a number decorating her room last summer when she moved in, because after all we are in the design and furniture business. Though I wished that we hadn’t done so much as I surveyed all the things we had to do to put the room back into its original sub-par condition in order to get her out of there. She had scheduled to have a handyman to meet us early on Wednesday to replace the window shades we had removed in order to accommodate her new curtains; to remove the new carpet we had installed over the existing textured and sickly-colored existing carpeting; and to replace the locking door knob on her bedroom door.
_________________________________________________________________ 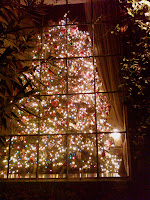 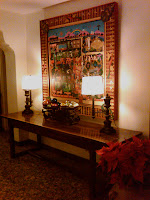