Its that time of year again, to overdose on art! And there’s no better time or place to do it than in Miami Beach which opened to the public today in this city by the sea.

Art Basel Miami Beach, in its 12th year, is an off shoot of its famous cousin in Switzerland, Art Basel. The show officially runs December 5th-8th, with private, invitation only openings last night and tonight. 50,000 attendees and over 250 galleries are expected from around the globe.

If you’re considered a VIP by the powers that be, then you will have access to the private openings and collections that aren’t open to the public, and to a fleet of chauffeur driven BMW’s to whisk you between the three main venues. What’s it take to be a considered a VIP? VIP status is awarded to individuals who are “engaged with the international art world at a high level”. 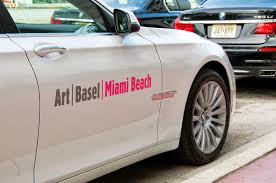 Art Basel Miami Beach is divided into seven ‘Sectors’, which may be viewed at www.artbasel.com/en/miami-beach.com and click on Sectors.

There are two other venues at Art Basil Miami: 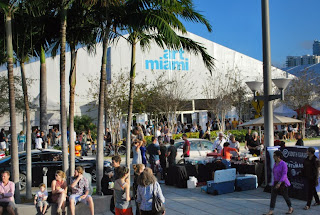 Art Miami at the Miami Pavilion (www.art-Miami.com). Art Miami has expanded to include two additional contemporary art fairs: CONTEXT, in a 45,000-square-foot pavilion adjacent to Art Miami in the Wynwood Arts District; and Aqua Art Miami, at the Aqua Hotel on Collins Avenue in South Beach. 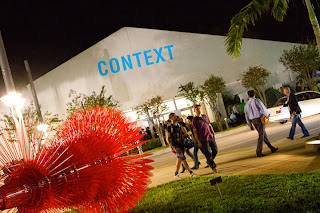 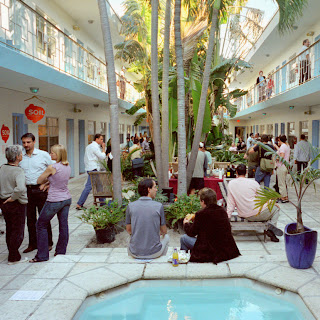 Aqua Art Miami, pictured above and below, is uber cool and appeals to a younger, hipper crowd 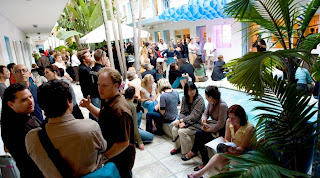 In addition to galleries, there are panel discussions, special exhibitions at public venues throughout the city, including the Miami Design District, and much smaller less well known galleries who circulate their own outlaw version of the art fair, nestled into hotels and motels across Miami and South Beach. The last time we were at Art Basel Miami Beach, many of the more interesting artists were situated in these outlaw venues in and around South Beach.

Not enough you say? Read on because there is much more going on during Art Basel Miami Beach.
There is Design Miami, billed as a global forum for design, which brings together the most influential collectors, gallerists, designers, curators and critics from around the world in celebration of design culture and commerce. 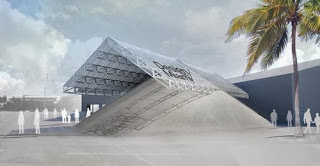 Then there’s the multi-dimensional PULSE, which is four fairs in one, considered a more progressive venue of diverse galleries presenting a blend of “renowned and pioneering contemporary artists”. Included are PULSE Projects, PULSE Play, IMPULSE, and PULSE Prize. Tired yet? There’s more! 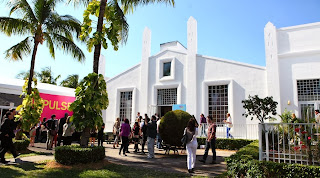 Check out NADA (New Art Dealers Association) at the Deauville Beach Resort, which promises to “explore new or underexposed art”. 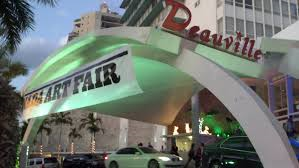 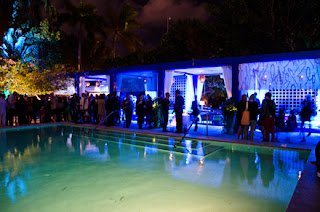 Another fair, Untitled, housed in a customized beachfront pavilion, places emphasis on “the quality of the viewer’s experience and the contextualization of the artworks exhibited”. 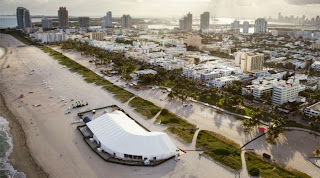 Below: Installation piece by Juan Vasquez

INK Miami is an art fair that focuses on contemporary works on paper by internationally renowned artists.

INK, at the Suites at Dorchester on Collins Avenue, shown below. 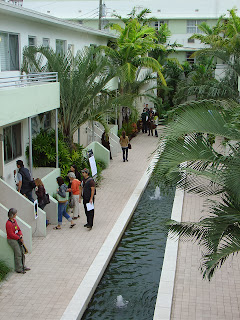 SCOPE, located on the sands of Miami Beach in a 70,000 sq. ft. pavilion, featuring an outdoor beach lounge and nestled amongst the iconic architecture of South Beach’s Ocean Drive. Scope’s emphasis is on activating emerging galleries and artists. 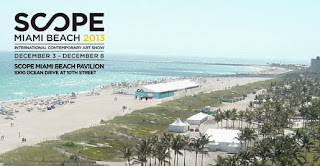 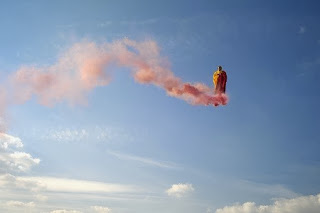 For the second year in a row, SCOPE will partner with VH1 with an on-site VH1 Indoor Lounge which will celebrate the crossover between art and music. Tomorrow night (Friday Dec, 6th) is the Official VH1 + SCOPE Party, featuring a performance by one of today’s hottest musical artists, and mums the word on who it will be. The party is invite-only, but the public will have a chance to be a part of it all by situating themselves just outside the space. 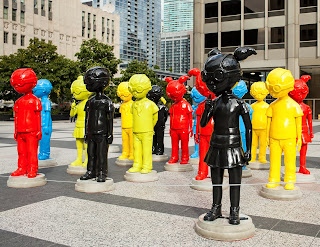 This year, VH1 and SCOPE have picked one visual artist, Hebru Brantley (above), and one musical artist, Kasseem “Swizz Beatz” Dean (below), to be featured in an on-air profile in which the two explore the symbiotic relationship between art, music and pop culture. 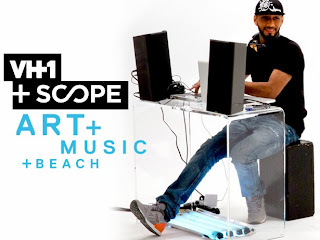 So, had enough? Well for those of you with insatiable appetites for contemporary and modern art check out the sites below:

These fairs are for serious collectors, and those that are serious about art. If you’ve inclined to say “my kid could do that!”, then you should save your money and stay home as hotel rooms are very difficult to get at this late date.  I found an article titled, “How Are You Supposed to Respond to ‘My kid can do that’?”. Check it out: HYPER ALLERGIC (www.hyperallergic.com). Read it and have a chuckle!

Check in tomorrow for more on where and what to see.