By late afternoon, we were back on I-10 West, and headed for home (actually after we made one more important stop at the Desert Hills/Cabazon Outlet Malls, in Cabazon, CA).

For miles we passed through the somewhat eerie looking electricity generating windmills, on our way to the Fields Road Exit for the outlet malls (a 20 minute drive East of Palm Springs). 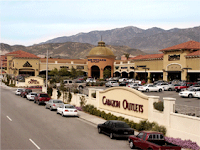 As we neared our destination, I made a mental list the things that I hoped I would find, and Caroline (MC) was verbally mapping out her shopping list, by category and by store.
The two malls are built side by side, and most people just call them the Cabazon Outlets. This place is huge, so we were ready for some serious shopping! These outlets have a lot of the higher end stores not usually found in Outlet Malls, including Bottega Veneta, Burberry, Diane Von Furstenberg, Dior, Dolce & Gabana, Fendi, Ferragamo, Georgio Armani, Gucci, Jimmy Choo, even Judith Leiber Handbags, Loro Piana, Prada, Yves Saint Laurent, Zegna, and even super watch retailer Tourneau (plus dozens of others that you would expect).

PHOTOS: Not everything was a “deal”. Pictured here are a couple of models that they may have trouble selling at any price!
Left: Gucci
Right: Dolce & Gabana
_____________________________________________________
I found it interesting that the announcements over the malls PA system were made in English, Spanish, French, Chinese and Japanese. For a moment I felt like I was in a European mall, where hearing multiple languages is the norm, instead of in an American outlet out in the middle of the desert.

Also, you will be happy to know that the Cabazon Outlets have plenty of “Public Restrooms” for their customers.
________________________________________________
Five hours after arriving at the mall, we were still there. We were famished, and the mall was closing. We asked the sales associate who was ringing up our final purchase (a Juicy Couture sweat suit for one of the grandmothers!) at the Juicy Couture Store if there was a nearby restaurant, to which she answered, “Yes, right next door, Ruby’s“.
I kind of laughed, thinking I heard her say “Boobies”. I thought I’d better check, so I asked her, “Did you say Boobies?” 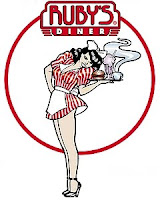 Well the whole counter of check-out gal’s started laughing. I think they were all punchy by that time of night, then the customers joined in the laughter too!
She had of course said “Ruby’s”, as in Ruby Tuesday’s Diner.
We dragged our multiple shopping bags out to the parking lot and sat them down next to Jetta Jane. Somehow as we shopped, we hadn’t given any thought to where our purchases might fit into the already overstuffed car. I’d already decided that we could donate some more of MC’s old stuff to the Goodwill so the new stuff would fit in.
Fortunately for MC, we managed to wedge in all of our purchase, sans the shopping bags and shoe boxes, as there was not a smidgen of extra room for such luxury’s.
Once seated in our booth at Ruby’s, we were promptly greeted by smiling Darleen, our waitress. We quickly assessed the menu, and both ordered the Kobe Beef Burgers, and a big fat order of French Fry’s. We were famished, and the Kobe burger was fabulous, really!
I must tell you that Darleen completely understood the concept of giving great customer service, and we tipped her accordingly. And note this: Ruby Tuesday’s has “Public Restrooms” for their customers as well!
If you eat at Ruby’s, be sure to ask for Darleen!
________________________________________________________
We arrived home in Santa Barbara at 1:15 A.M. on the fifth day!
Whew!
Good Night Moon