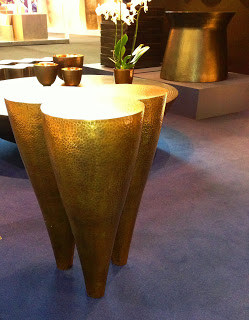 Its the last post for the Fall 2013 Maison & O’bjet Show in Paris, France.

One of our most exciting discoveries of the entire show was made today when we found the French maker of solid copper tables. These tables (and a few accessories) featured multiple patinas and hammered and scored patterns and detailing. Expect to see this collection of perfection in Cabana Home stores in mid-January. 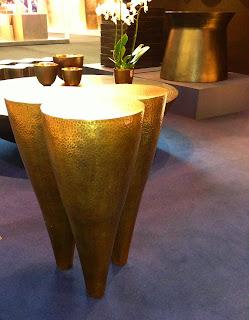 Loved this table with a triple legged base that meets at a scalloped top, above. 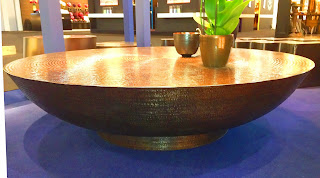 The large round Cocktail Table, above, is 50″ in diameter, and is not only sculptural, but the textured pattern, below, is hand wrought. 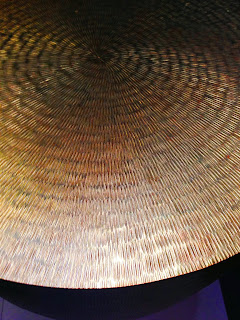 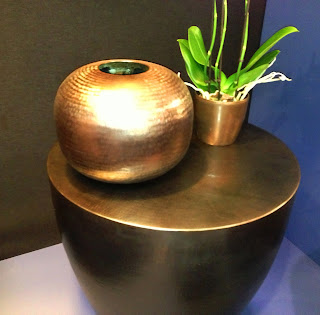 Above: A spherical vessel is detailed with hand tooling similar to the cocktail table. Vessel rests on a smooth, tapered, round table. 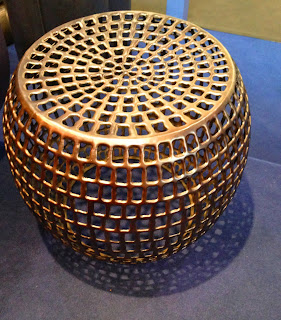 The occasional table, above, is poured and cast solid brass. 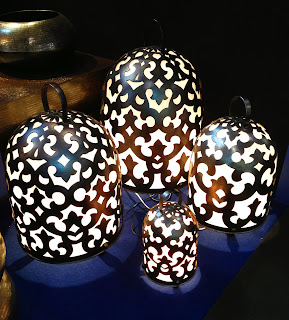 We also found some interesting lanterns (to be used indoors or in covered outdoor areas only!) sheathed in off-white underneath a Moroccan motif metal pattern. 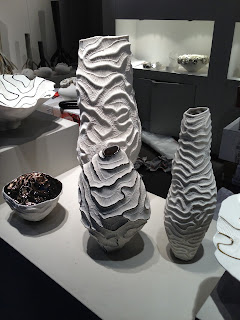 Organic shapes and textures were often married to more refined finishes such as mat white, gold, or silver. 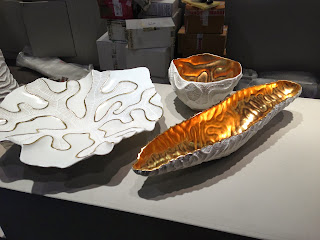 More glassware in trending colors were half the story, with the other half being mat, or opaque finishes, below: 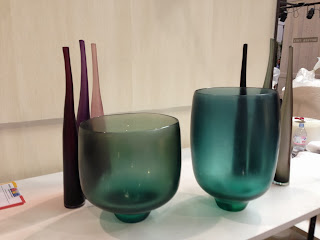 The Maison & O’bject show ran simultaneous with Paris design Week, which included and opportunity to see the atelier of famed French architect Jean Nouvel. Nouvel has won the Aga Khan Award for Architecture and the Pritzker Prize. 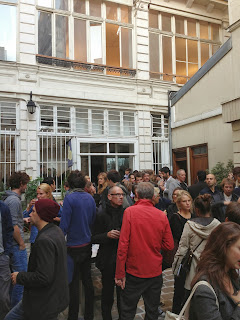 Ateliers Jean Nouvel, above.
Ateliers Jean Nouvel is one of the largest practices in France, with 140 people in the Paris office. Nouvel is also known for designing consumer goods; he designed a flacon for L’Homme, an Yves Saint Laurent fragrance, in a limited edition, and a pair of utilitarian urban boots. 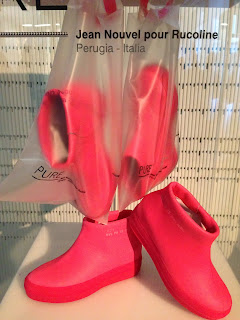 A sleek table and stacking chairs in a corner of Ateliers Nouvel stand in contrast to one another. 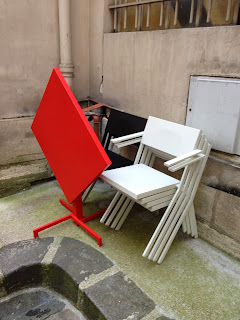 Nouvel was awarded the Pritzker Prize, architecture’s highest honour, in 2008, for his work on more than 200 projects, among them the bullet-shaped and “candy-colored” Torre Agbar in Barcelona.
The jury of the Pritzker Prize noted: Of the many phrases that might be used to describe the career of architect Jean Nouvel, foremost are those that emphasize his courageous pursuit of new ideas and his challenge of accepted norms in order to stretch the boundaries of the field.


The show is over, but we still had another week in Paris and then on to Rome for more work. We loved the location of our hotel, the Le Pavillon des Lettres, just a-half block off the Rue du Faubourg Saint- Honroe (8th Arrd.).
The hotel markets itself as “Literary Hotel”. Each of the 26 rooms were lettered (not numbered) with the first letter of the last name of a significant poet, a writer, an impassioned virtuoso, or genius, whose spirit is carried over in the décor of the rooms and suites. Extracts of their individual work was chosen and printed on the walls.
We found this hotel because it’s the sister to The Pavillon de la Reine which was sold out, and is one of our favorites in Paris, located in Place des Vosges, in the Marais district. 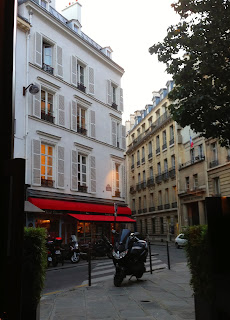 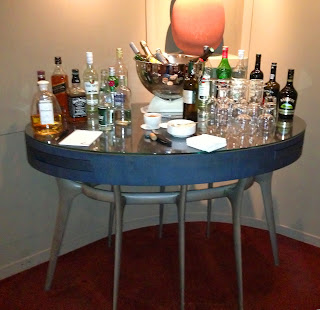 The honor bar in the lobby of the hotel. Make your own drink the way you want it, and then sign for it. So very civil! 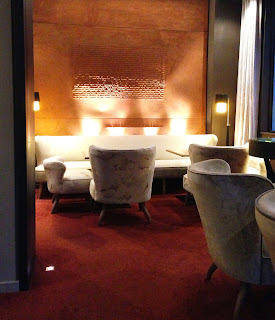 The sitting area in the lobby of the hotel. 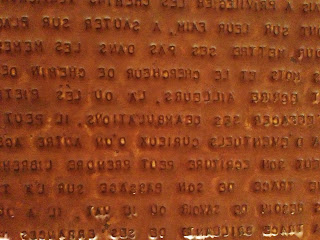 The back wall of the sitting area in the lobby was poetry (in French), letter pressed into metal.
As most of you know, there is great shopping on this neighborhood, and below are pictures from some after hours window shopping. 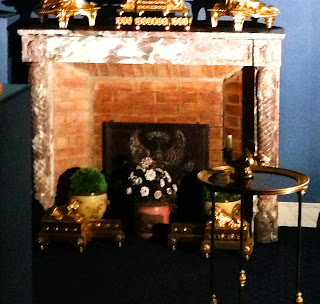 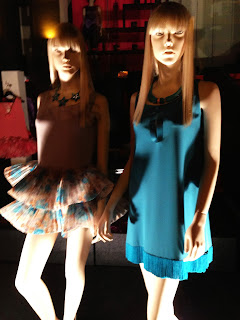 Models made scary by bad lighting. 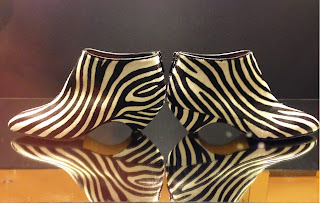 Walter Steiger, one of the shoe designers I got to work with back in my Neiman Marcus days, the house remains stronger than ever. The Vladimir bootie in faux zebra, above. 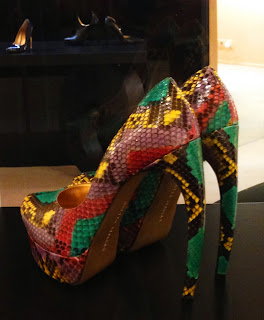 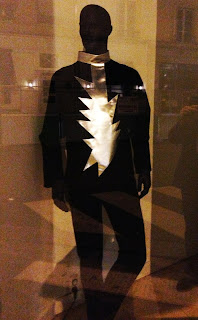 A scary outfit on a mannequin in the window at Pierre Cardin.
As I wind down this series, you may be wondering if there was no “Worst in Show” at this, the last day of the Maison & O’bjet Show. Well, wonder no more, because below you will see the last of the “Worst of the Show”! 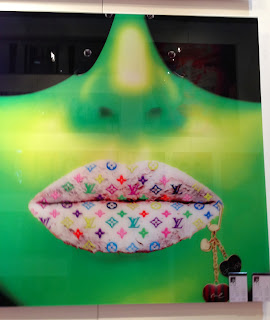 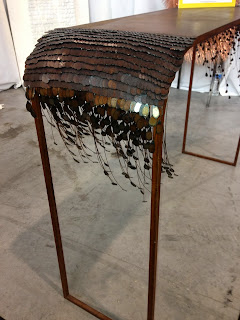 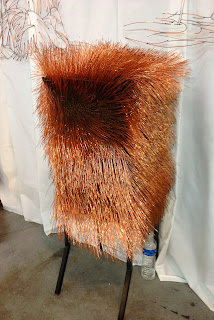 Porcelain vase with baby doll arms and legs, below. 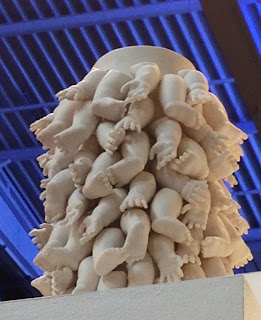 See, I didn’t forget! Thanks for joining me in this, the 2013 Fall Maison & O’bjet Show series. I have now moved on to the High Point Furniture Market in High Point, N.C. for the Fall 2013 show. The next post will be from the shores of the Carolina’s, until then…
Good night moon.