More about Florence accommodations: How about having your own condo in the city center?

Prior to leaving for Italy, my friend Jenifer Smith, who owns Santa Barbara Magazine (sbmagazine.com) told me about another mutual friend who had recently purchased a condo in Florence. She described an incredible palazzo that had been converted into condos. Sounded right up my alley, so we made an appointment to see it, and it was worth every second of the tour. Turns out that our hotel (also a former palazzo) faced the project, the Palazzo Tornabuoni.

Palazzo Tornabuoni is an exclusive Private Residence Club, managed by the new also new and spectacularly reviewed Four Seasons, Firenze. Located in the heart of Florence, this 15th century Palazzo, which was once the home to Pope Leo XI and the powerful Medici family, is being meticulously restored to its original Renaissance-period splendor while incorporating modern comforts and conveniences. Upon completion, Palazzo Tornabuoni residence club members will enjoy the ultimate Florentine lifestyle, calling this historic palazzo home. Planned for up to 36 elegant studio, one, two and three-bedroom residences, depending of course whether or not Buyers snap up more than one unit to combine them. The more expensive the unit, the larger the square footage, the better the floor plan, and of course the better views. This place is so incredible and rare that I’d consider the maids quarters. 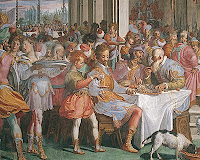 Renaissance Beauty
Palazzo Tornabuoni dates prior to the 15th century. Between 1466 and 1469 Giovanni Battista di Francesco Tornabuoni commissioned Renaissance architects to design and enlarge his family ancestral home to create Palazzo Tornabuoni. For centuries the Palazzo has been renowned for its grandeur, architecture, fresco’s, statuary and its illustrious residents.
The renaissance painting above, is in the two story high Library of the Palazzo, which is a splendid common area for fellow owners to gather with a full bar and an upstairs Smoking Room. 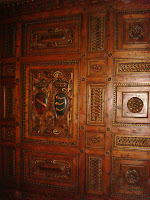 The influential Tornabuoni and Corsi families, Pope Leo XI and the Medici, one of the most powerful families in the history of Europe, called Palazzo Tornabuoni home.
At left: The ceiling of Pope Leo XI’s apartment, his personal residence prior to his election as Pope. Carved into the wood

ceiling is his crest. He was a member of the powerful Medici family.
At right: The crest carved in stone above an exterior arch.
The Interior floor plans were overall somewhat odd. Of course the palazzo had been remodeled and expanded numerous times, having started as a typical tower house in the 1400’s. Remnants of the original tower are viewed from several of the apartments. The palazzo now takes up an entire city block making the original foot print seem rather tiny.
The apartments are laden with incredible mouldings and architectural details from several different periods. Good floor plan or not, the apartments are completely luxurious, and are furnished in a refreshing eclectic style. Fortunately the developers didn’t feel the need to create a theme park atmosphere of historic incontinence.
The collage of photos below were taken surreptitiously by me in between conversations with the projects Realtor. She didn’t say that I couldn’t take photos, and naturally I didn’t ask if I could. 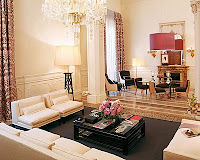 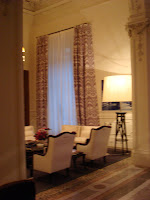 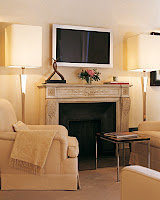 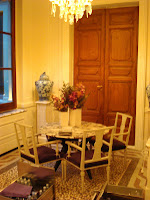 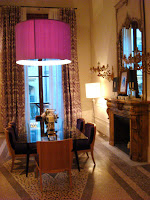 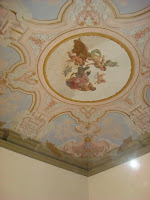 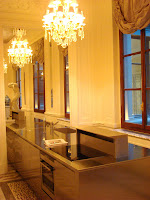 So how much? What does it take to buy into the palazzo life? Probably as much as you would think!

A one bedroom efficiency unit with no view, sold for $285,ooo US, which gives you four weeks use per year. Monthly dues are $1,100 per month . From there the sky’s the limit. You can spend $3 mil plus, for the rights to four glorious weeks per year at the palazzo, with dues of up to $2,700 per month.
Though the developer didn’t ask for it, should you find yourself in the marketplace for a palazzo in Florence, here is the contact info:
Tornabuoni S.R.L.
By Phone: 1 (866) 753 6667 Toll-free in USA and Canada
44 (08) 70 6098 555 in UK
39 (055) 268 966 in Italy
By Mail: Palazzo Tornabuoni
Via Tornabuoni 16
50123 Firenze
Ahhh…the good life! I loved every second of my palazzo experience. I was a potential addition to the long history of the Palazzo Tornabuoni, that is if I decided to afford it, and that in itself was fun to consider!
Good night moon