Rome, IT: Our Arrival (I’ll let you in on this up front: There is no home fashion in this report either, just a retelling of our taxi experience upon our arrival in Rome).
We were sadly thinking Goodbye Florence before happily saying Hello to Rome for our real Roman Holiday, after successfully retrieving our daughter, her luggage, and our credit card from her semester abroad in Florence. The luggage is the operative word here!

The total number of pieces of luggage that I hoisted onto the train was eleven (11), not including the six carry-on bags.
Once aboard, I’d collapsed into my seat on the Eurostar, looking more like the sweating hired help than the proud father.
Unashamed, I fanned myself with my First class ticket, while my horrified fellow car-mates looked on with disapproval. Too bad I thought to myself, its over and I’m over this luggage.
Note: Not an actual picture of our luggage! But close!
As the train sped along upwards of 220 mph, and I had begun to cool down, I started dreading our arrival in Rome and the stack of luggage that awaited me. Suddenly, I wished we had taken a slower train. 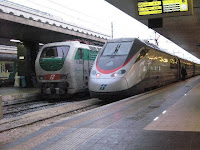 When we had arrived at the train station in Florence and the bags were transferred from the driver to me, I had to load the two baggage carts with the bags myself, which were so heavy the wheels on the front of the carts wouldn’t roll.
After several attempts, I stood on the back of the cart to get the front wheels off the ground, first one, then the other. My wife pushed one cart, and I pushed the other, both carts with front wheels off the ground.
Our daughter pulled three large rolling bags just ahead of us trying to act like she wasn’t with the “wheelie popping” adults behind her. I must admit, we must have looked like a band of well dressed Gypsy’s.

Right: The Train Schedule Board, in Rome, Italy. Sex Sells even train tickets! You gotta love Rome!
Upon our arrival in Rome, it was chaotic as expected, so our plan was for my wife and daughter to quickly disembark so I could began handing, more like tossing, her our trove of bags. Caroline (my wife) was immediately met by a gypsy who promptly grabbed one of the bags from her and loaded it onto a waiting luggage cart, as if he were a porter who worked for the train station. She had one hand on the bag, her head darting back and forth between yelling at the gypsy, and summoning me for help. My daughter, having already experienced this scheme, reached down and jerked the bag off of the cart and told the guy to get lost (so she said…) in Italian. He grabbed at the bag and a tugging match ensued. I had been man-handling the bags off of the train during the near melee, and when I finished, I yelled at the guy, in my version of Italian (actually in English with an Italian accent), “Get the hell away from them, and my bags!”

He left abruptly, leaving us with the pile of bags. I wondered if maybe we shouldn’t have risked letting him load the bags considering the large pile that had accumulated next to the train. I noticed several other Gypsy’s using the same guise, and then I got aggravated that they would take free carts, that is if you could find one that hadn’t been already commandeered by another gypsy, and attempted to charge unsuspecting passengers for its use.

Where were the Carabinieri (Italian police) when you need them?

Resourceful as ever, our daughter watched two passengers as they headed to their train car, and she stalked them until the last bag was removed from their cart. Once empty, she lurched for the handle, when suddenly her hand was met by that of another of the rogue Gypsies, trying to commandeer yet another free cart. She yelled for all to hear, “That’s my cart!” and with that she gave the cart a hard jerk to the right and the stunned cart pirate let go in astonishment. That settled, she circled around the dumbfounded one and rushed to our aid and the tall pile of bags. Once our we were loaded, I briefly sighed a relief, “we’re almost there”, I told myself, to the Taxi stand that is, and the driver could handle them from there. Or, so I thought! 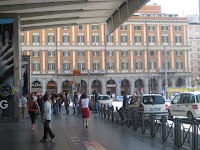 I’d been forewarned, and you be too, to stay clear of the rogue Taxi drivers who rip-off unsuspecting tourists by not using meters, etc…
I was hyper-focused on finding the official Taxi Stand. When we rolled up to the curb, the Taxi’s were parked in a disorderly fashion, one in front of the other, on the curb, sideways, in the street, between lanes, it was a real free for all. A man stepped out of the fist car and approached me. We discussed the bags and the need for two cars, to which I agreed. I’d take half the bags in one car, and the girls could ride together in the other with the other half. The driver volunteered that the fare would be 25-30 Euros per car, and I said that’s’ fine as long as the meter was on. The driver winced, somewhat indignant I supposed that my request somehow conveyed that he might be dishonest, and he assured me that the meter’s would be on.

He quickly summoned a buddy, not the next car in line, but one from the back of the line of Taxi’s, which didn’t look quite right to me, but since he was the lead guy, I went with it. I put the girls in his car, and I rode in the second car following behind. I hadn’t mentioned the meter part of the negotiation to my wife, only the fare that the driver had quoted. I noticed that my driver wasn’t using his meter to which I justified fine because after all, he wasn’t the lead guy. 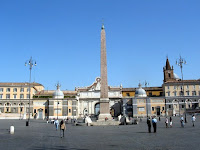 Twenty five minutes later we arrived at our apartment, near the Piazza Popollo. The lead driver came up to me and said that it was going to be 40 Euros for each car, because of the distance and the weight of the bags. I knew the bags were crushingly heavy, so I gladly paid him, and gave them each a tip, for a total of 100 Euro’s.

Later, I asked my wife if the meter had read 40 Euro, and she said that he hadn’t used it because he told her that I had already agreed to a fare with him.
No matter I thought, it seemed fair enough to me, and after all, we’re in Rome, we had arrived at our fabulous apartment for the Christmas holiday, so lets just have fun!

Left: The Train station in daylight…it looks so innocent!

The next morning we took a taxi back to the train station to meet our guide (who was fabulous, but more about him later) for a day trip to the ruins of Pompeii. Upon arrival, the meter read a measly 6 Euro, and the drive took less than five minutes which was perplexing. I asked the driver if we were at the main train station, and looking at me a bit puzzled from his rear view mirror, he confirmed we were indeed at the main train station. And, it was the same train station at which we had arrived just ten hours before, but I wondered how this trip could have taken just five minutes and cost only 6 Euro, when last night it took twenty five minutes and cost 100 Euros (with tip)?
Once we located our guide and boarded the train to Pompeii, I asked the guide about the difference in the taxi fares. He grimaced and said that we’d been “had”. He told us we had fallen victim to the typical taxi scheme that most tourist fall into at the train station in Rome.
“You got taken”, he said in excellent English.
“Taken!? But, how?”

“Rogue taxi drivers. The government has tried to crack down on them, but, its Italy…” he said. “I hate it for the tourists, but it happens, too often”.

I winced at his words, and mumbled “taken” under my breath. I hated to have been taken by those jackal’s, and decided this was indeed a story to be shared with other potential travelers, and my readers.
So, when in Rome… go to the official Taxi Stand, it’s the one which has multiple painted lanes and curbs, and better signage, and the Taxi’s are parked in a uniform queue It’s on the side of the train station where all taxi’s drop off and pick up passengers. The rogue taxi stand is also signed, but it is actually on the main street side of the station, which is the entrance mostly used by pedestrians who have arrived by foot or on the Metro.
Speaking of the Metro, I never rode it, but my wife and daughter did and thought it was easy to navigate, efficient time wise considering the traffic throughout Rome, had well located stops, and the price was a fraction of even a legitimate taxi fare.
The ordeal with the rogue taxi was the only negative thing about our entire trip to Italy. Other
than that, this was a flawless trip to the Eternal City.
Tomorrow, Pompeii memories.
Good Night Moon.