As I settled in at home after a weekend out of town, I looked at a stack of newspapers that had accumulated from that Wednesday-Sunday, and I just could not put them into the recycling bin without first having read them. It’s not just wasting the 75 cent cost of the newspapers, and it’s not as if I have loads of spare time on my hands. It’s just something about an unread stack of newspapers that I cannot bear to discard…what if I miss something? So, scanning the headlines would have to suffice. I opened the front page section of that Fridays LOS ANGELES TIMES and spotted the obituary for the famed architectural photographer Julius Shulman, who had passed away a few days earlier at the age of 98.

When I got to the Saturday LA Times, the front page announced the death of Walter Cronkite, the veteran news anchor who broke the news of world events to me from 1962-1981.
I was immediately saddened by the loss of these two men, and then thought of how fortunate I was to have met one of them in person (Mr. Shulman), and to have grown up watching the other (Mr. Cronkite) on television. Both of these gentlemen had an influence on me; each in very different ways. I am grateful to have had the influence of these important men in my life.
JULIUS SCHULMAN, 1910-2009
I had only recently met Mr. Schulman, at a launch party for the new coffee table book/reference book, The MEDITERRANEAN HOUSE in AMERICA, written by Lauren Weiss Bricker, with photography by Juergen Nogai (published by ABRAMS, New York). Our clients, owners of a Wallace Neff designed home which was prominently featured in this book, had invited Caroline and me. We were asked to gather in the lavish living room where the author and the photographer were to introduce their book.
As a devotee of architecture, both historic and contemporary; traditional and modern, I was excited to hear them speak and to learn about their perspective on Mediterranean residential architecture. The room was all a buzz, everyone was talking, and I don’t know if anyone was listening.

I noticed an older gentleman, well dressed and in a suit, which stood out to me as it was a bit more dressed up than the “California casual” style worn by of the rest of us. No one was talking to him, and since I’m always interested in making everyone feel a ‘part of’, I couldn’t’t just let him sit there alone, though he seemed to be enjoying his solitude, watching the spectacle of so many people involved in so much conversation. As I approached him, he looked up at me and smiled.

I introduced myself, “I’m Steve Thompson from Santa Barbara, this is a wonderful house.”
The gentleman responded, “My name is Julius Schulman. Yes, this is a wonderful house”
Julius Schulman! I exclaimed to myself, trying not to trip over his polished brown wing tip shoes in my excitement.
“Mr. Schulman!” I gushed, “It’s so nice to meet you!” My salivary glands were working overtime and I felt drool forming in the cracks at the side of my mouth, and perhaps even spraying Mr. Schulman with some of it (you how that happens sometimes?).
“Well, it’s nice to meet you”, he answered heartily.
Suddenly, I felt awkward about what to say next. He sat there smiling at me waiting for me to say something. “Did you ever photograph any of Wallace Neff’s home’s”, to which I quickly followed up with another question, without taking a breath and thereby leaving no time for his response to the first, “Did you do any of the photography for this book?” (In reference to the book being launched that day).

“No, no I did not”, he said. “I’m here because I’m interested in teaching young architects about how you build great homes. This is a great home”, he declared, and he went on to say, “Architecture schools don’t teach architects how to design great homes anymore. I’m not so sure that you can teach someone to design this kind of beautiful architectural detail, but I’m working on it!” he declared. He also told me he had been teaching some architectural classes at one of the LA universities (I just can’t remember which one because I was too excited to listen!).

“I totally agree. I don’t think you can teach someone to be creative, I believe that they have to have that innately, but I do think you can teach them about different styles and details, like these,” I said pointing to the wonderful detail of the limestone fireplace surround, across the room from us.
He smiled with approval.
“Mr. Schulman, I’ve always loved your work.” “My favorite photograph is the one of the glass house hanging over the cliffs above Los Angeles, the one that was taken at night with the city lights in the background,” I said, vividly recalling the image in my head as I spoke of it.
That was the photograph that accompanied Mr. Schulman’s obituary, and is shown above.
The photograph is properly known as the photo of “Pierre Koenig’s Case Study House No. 22”, taken by Mr. Schulman in 1960. According to my Internet search, that photograph is considered by many architectural historians as the most famous architectural photograph ever taken in the United States.

And there I sat drinking my coffee, next to the stack of newspapers, thinking of the day that I met this man. I didn’t personally know just how many achievements were accorded to Mr. Schulman, until I did the Internet search on his name, where upon multiple pages bearing his accomplishments and photographs came up. I very well knew of that particular photograph that I had shared with him, and several more of them, I just never knew that they were made by him. On further examination, the photos began to become recognizable to me as the work of Julius Shulman because he had developed his own style. A style like his cannot be taught; his was innate.

One article stated that Mr. Schulman got his start in 1936 with a photo shoot for the architect Richard Nuetra. It said, “Shulman’s roster of clients read like a who’s who of pioneering contemporary architecture: Rudolf M. Schindler, Gregory Ain, Frank Lloyd Wright, Charles Eames, Raphael S. Soriano, John Lautner, Eero Saarinen, Albert Frey, Pierre Koenig, Harwell Harris, and many others.” Wow! What an unbelievable life to have lived and worked with these architectural giants. Schulman felt like his work helped sell the architects work to the world. The articles said that he felt like he could “sell it” (the architects work) better than they could. And, I believe he was right!
I’m so pleased to have met you, Mr. Schulman.
WALTER CRONKITE, 1916-2009:
I grew up watching Walter Cronkite on television, as he guided us through world events of the time. My earliest memory of Mr. Cronkite was his soothing voice, as he broadcast round the clock, reports on the assassination of President John F. Kennedy. I was in preschool and far too young to grasp the gravity of the loss, but I saw it on my parent’s faces as they watched the coverage for hours at a time, seemingly for days on end. I remember his commentating on young John Kennedy saluting his father’s flag draped coffin, and wondering why that was so important, and what was that little boy doing there; why was saluting the flag so important, after all I could do that. John, Jr., was three years old and I was five years old.

My next memory of Walter Cronkite was of Apollo 11’s Neil Armstrong, when he touched down on the moon in the lunar module, The Eagle. Mr. Cronkite seemed to be directing the entire space program by his tone, and the confidence of his reporting. I was eleven years old then, and Walter Cronkite was still with me.

I never met Mr. Walter Cronkite, but I thank him for his rock steady and honest delivery of the news. He taught me about the idea of presence, something a theatre teacher once said that I had shown, when she used a theater performance of mine as an example of stage presence. Mr. Cronkite had that; he had presence, and that’s what he taught me.
Thank you, Mr. Cronkite, “And that’s the way it is,”.
Another Encounter with a Famous Person 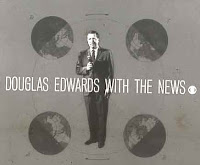 Once I did meet the famed network anchor, Douglas Edwards (as in Douglas Edwards with the News), America’s first network news television anchor, anchoring CBS’s first nightly news broadcast from 1948-1962. Mr. Edwards was eventually replaced by Walter Cronkite in 1962 (just a year prior to the Kennedy assassination).

I was nineteen and I was in New York City with my sister, Sheri (you know, the one who’s the top notch college professor that unofficially edits my blog). We were there on a “Broadway Theater” trip, sponsored by the college she was attending, with a group of future thespians. I thought I was brilliant, getting to go on a trip to New York City, and getting college credit for just watching a few plays. “A piece of cake!” I told myself.
Little did I know that I would be dragged to thirteen plays in seven days, not to mention the dozens of other appointments and tours we were required to make, including a Costume factory, Set Designers and Directors, and even meeting some of the actors themselves. While it was fun, and as if that wasn’t enough, my sister dragged me to a studio tour at CBS. We got to watch a live broadcast of Douglas Edwards, one of his last. It was so interesting to watch him from the sidelines, with all the studio lights trained on him, the camera following his every move, and watching the movement of the microphones overhead catching every word he said. There we were, just a few feet from the man himself, the man who preceded Walter Cronkite.
As we stood there watching him, my sister struck up a conversation with a nice, and well preserved woman. That woman turned out to be Mrs. Douglas Edwards. After the broadcast, he came over to his wife, gently kissed her, and then turned around and asked us our names, and said he hoped we had enjoyed the broadcast. In a split second he disappeared through a door marked “private”, with his wife giving us a little wave good bye over her shoulder as the door closed behind them. What a lovely couple they made.
As Mr. Edwards said each night, “Good evening, everyone, from coast to coast”.
Goodnight Julius.
Goodnight Walter.
Goodnight Douglas.
Goodnight Moon.