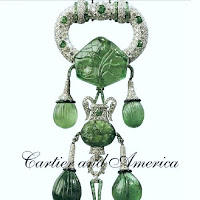 On the Friday after New Years Eve, we made our way to the CARTIER and AMERICA show at the Palace of the Legion of Honor Museum (exhibit open thru April 18th).
The show was absolutely amazing, and was much better than I could have possibly imagine, and it would be worth the trip just to see the Legion of Honor building! The museum building, which is a spectacularly beautiful is in the French Baroque style, overlooking Lincoln Park and the Golden Gate Bridge. The Legion of Honor was completed in 1924 and was a gift to the City of San Francisco by Alma de Bretteville Spreckels, wife of the sugar heir and magnate Adolph B. Spreckels. The building is a copy of Palais de la Légion d’Honneur in Paris. 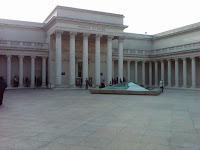 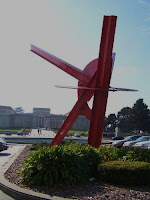 On the garden terrace in front of the museum is the sculpture, Pax Jerusulum, by American artist, Mark di Suvero, lent jointly by the artist and the fabulous San Francisco art dealer, John Berggruen (http://www.berggruen.com/) of San Francisco. 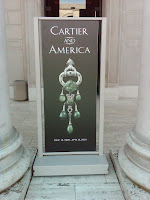 For the “Cartier and America” exhibition, the Legion of Honor curator Martin Chapman amassed close to 300 jewelry, fashion, and decorative items, pieces that belonged to the most prestigious figures of American meritocracy, including pioneers of the New World, financiers, explorers, politicians, great artists and Hollywood and Broadway stars, as well as a range of highly creative and energetic American patrons.

The jeweled broach used on the cover of the exhibition catalogue, Chapman sites, of all entries, the circa 1923 pendant brooch of seven carved Indian emeralds—including one from the Mughal era—as the surprise showstopper. It belonged to the cereal-fortune heiress Marjorie Merriweather Post, who has five additional treasures on display, and was worn at the shoulder, the stones cascading from a diamond buckle.

“She was a restless jewelry wearer,” says Chapman. “She was constantly having things altered, constantly buying things.

Her daughter Dina Merrill, the actress, once said that when her mother became ambassadress to the Soviet Union, they must have thought the regime of the czars had returned.” 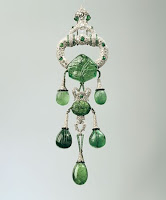 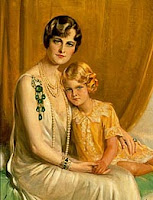 Above Left: A painting of Marjorie Merriweather Post wearing the broach, with her daughter, Dina Merrill.
Above Right: A close up of the the emerald broach.

Included are a necklace owned by the Singer Sewing machine heiress Daisy Fellowes then known as, “the world’s most elegant woman.” In the thirties, she commissioned Cartier to create this Mughul-inspired necklace (shown below, left) whose colorful gems (a riot of rubies, emeralds, diamonds and sapphires) which became known as the Tutti Frutti style; and a pair of Tutti Frutti double-clip broaches made by Cartier in 1935 for Mrs. Cole Porter is also on display. 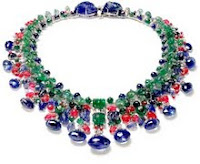 Above Left: The first piece of Cartier Tutti Frutti jewelry was this necklace made for the heiress to the Singer Sewing Machine Company fortune, Daisey Fellowes.
Above Center: Mr. and Mrs. (Linda) Cole Porter.
Above Right: The Tutti Frutti broach owned by Linda Porter.

There was also Mrs. Cornelius Vanderbilt III’s diamond-and-platinum pendant brooch; a classic Tank watch designed for Fred Astaire, as a gift from him to his Jockey.

Above Left: A clip brooch (with three emeralds) made in 1937 for Mrs. Irving Berlin.
Above Right: A jeweled handbag of Mrs. Condé Nast, engraved with her home address (1040 Park Avenue) in the possibly delusional expectation that it would be returned if ever mislaid.

And among the other giddily refined oddments is Mary Pickford’s vanity case, J. P. Morgan’s perfume bottle, horse racing’s Triple Crown Trophy, and Mrs. Vanderbilt’s jeweled car travel case; A model of the Lunar Module, one of three individual 18 karat gold LM models were made in 1969 by the jeweler Cartier in Paris on behalf of Le Figaro Newspaper and presented to the three Apollo 11 astronauts (Neil Armstrong, Buzz Aldrin, and Michael Collins) during their post-flight tour in Paris. This example was presented to Michael Collins. 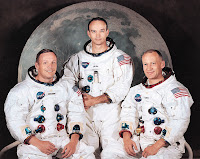 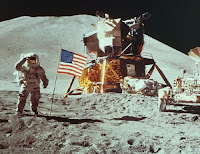